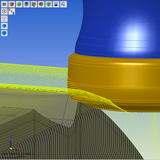 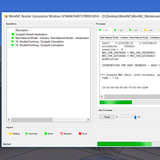 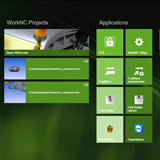 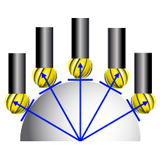 Vero Software will exhibit the new WORKNC 2017 R1 version at the Midest Trade Fair in Paris from the 6th to 9th of December on stand 6-M031.

Miguel Johann, WORKNC Product Manager, is certain that visitors will be surprised by the new features figuring in this latest version of WORKNC which is aimed at improving productivity for its CAM users.

“WORKNC 2017 R1 is the first version under the new six-month cycle release plan. This allows us to deliver the latest features to our customers much faster, keeping them on the vanguard of technology."

Amongst the range of innovative functions which appear in WORKNC 2017 R1, is the new Parallel Finishing toolpath based on the new "Advanced Toolform" technology from Vero Software. The new Parallel Finishing toolpath calculations take into account the real physical geometry of the cutting tool, whether it is a high-feed tool, a standard tool or whatever form of convex tool.

Miguel Johann says: While version 2016 brought us the revolutionary Waveform Pattern for incredible Roughing performances, version 2017 R1 introduces, for Finishing, the paradigm-shifting “Advanced Toolform”. We invite customers and prospects to break away from the limitations of standard tool shapes and explore the world of High Feed Cutter shapes."

Why is this technology so important for improving the productivity of WORKNC users? Touching the part with a bigger radius results in smaller and smoother cusps which are more widely spaced allowing the use of larger Stepovers and machining times to be reduced by up to 70%. Furthermore, thanks to this new technology, positive or negative stock allowances can be defined. This is new. WORKNC once again consolidates its position as the CAM market leader.

A myriad of other innovative features allowing important time savings in terms of programming are available in WORKNC 2017R1, for example "3D Tool Compensation" for 3 axis and 3+2 axis machining. This is a unique new feature. No more need to program and calculate several different toolpaths to determine the required result and this applies to whatever controller is fitted to the milling center.

Among other highly anticipated improvements by established users of WORKNC is the Dynamic Calculation Queueing function which offers important time savings. Operators can now launch the creation of several toolpaths one after the other, run postprocessors or check for eventual tool holder collisions without having to wait until the end of calculations in progress.

Also featured, is the new WORKNC Launcher, which integrates a customizable zone to which you can drag and drop your favorite applications or folders; the new Tool Library, fully compatible with other libraries available on the market and in which different speeds and rates can be associated to a tool according to the material to be machined.  And much more.