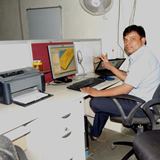 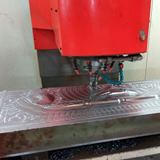 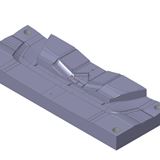 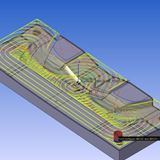 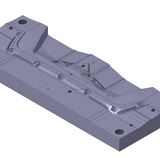 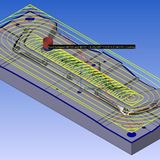 The revolutionary Waveform Roughing Strategy from Vero Software has reduced machining times by 40 per cent for a manufacturer of vehicle guards, roof racks and steps, while tripling cutting tool life.

M-TEK Engineers, based at Pune, in India, were having issues with machining automotive accessory parts on a 3-axis BFW vertical mill, with power of only 7.5kv on the BT40 spindle.

M-TEK Director Mandar Kirane says: “This meant we weren’t able to use a 52 R 3 bull nose Hitachi cutter with more than a 0.5 mm depth of cut. If we did, the load increased on the spindle, causing the machine to stop.

However, after updating their WORKNC software to the new 2017 R1 release which incorporates Waveform Roughing, the new programs utilised a 1.2 mm depth of cut with the same tool, and ran successfully on the machine, giving a constant spindle load.

“One part – the core for an SUV front bumper guard – took 10 hours 14 minutes to machine using traditional methods, but just six hours 38 minutes with Waveform. And machining time for the cavity dropped from 8 hours 25 minutes, to 5 hours 11 minutes using Waveform.”

An ISO 9001:2008 and 14001:2004 certified accessories manufacturer, M-TEK have more than 15 years experience, and a workforce of more than 350, including 15 engineers specialising in production, development, marketing and design.

Their products include:
•    A market leading range of front guards for a variety of cars which improve the appearance and protects the front bumper. They are available in a choice of materials, including Stainless Steel, ABS, and Polyurethane. M-TEK are India’s only accessories manufacturer with ABS blow moulding and Polyurethane foam injection facilities in one factory, with a vertical machining centre.
•    Guards to protect the rear side of the vehicle, particularly useful when parking.
•    Roof racks.
•    Steps for the doors, making it easier for young children and the elderly to get in and out of the car.

Sachine Maindargikar says WORKNC now plays a vital role in the full manufacturing process: “Beforehand, we used to outsource the jobs for machining. But during our review meeting in October 2016, our management decided to stop outsourcing and find the better ways to increase the productivity, in-house.

“I contacted the WORKNC team and they immediately suggested trails with Waveform. We’ve conducted the trails and discovered that the new Waveform roughing strategy in WORKNC can save our machining time up to 40 per cent, compared to regular methods.”

The company, which is an OEM supplier to vehicle manufacturers Mahindra & Mahindra, and Tata Motors Ltd., operates out of a 120,000-square foot factory, and has plans to expand with a further 25,000 square feet.

Business: Manufacturer of vehicle guards, roof racks and steps based at Pune, in India.

“We’ve conducted the trails and discovered that the new Waveform roughing strategy in WORKNC can save our machining time up to 40 per cent, compared to regular methods.”