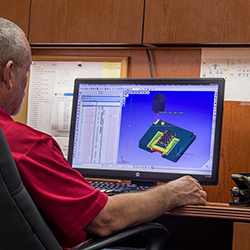 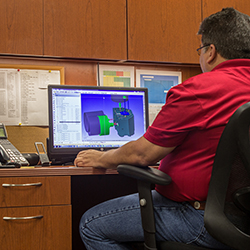 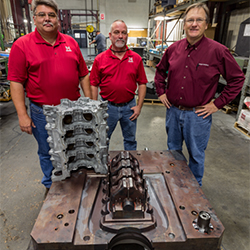 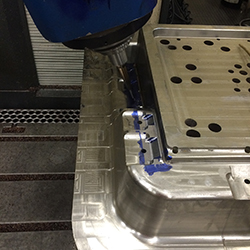 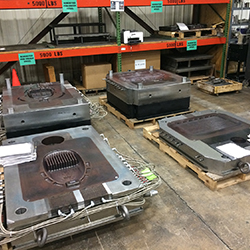 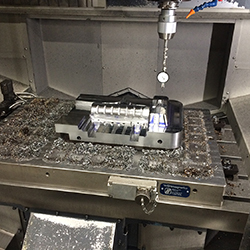 Staying on Top of the Game

Longevity is the name of the game at Mangas Tool and Die, where commitment to efficient, high-quality manufacturing has kept the company going strong for nearly half a century.

“We’ll be in business for 50 years next year, which is one of the things that we pride ourselves on,” says Jeff Newton, quality control and programming manager for Mangas. “Many of our employees have been here for over 20 years, so we have a lot of combined experience.”

Based in Muscle Shoals, Alabama, Mangas Tool and Die is a division of Pace Industries, an integrated tool and die company that provides die casting, manufacturing and engineering solutions worldwide.

For Newton and his team of experienced manufacturers, longevity is closely linked to experience, customer satisfaction, and an ongoing willingness to utilize technology.

As Mangas specializes in large, high-pressure aluminum, zinc and magnesium die-cast tooling, about 50 percent of its work is done for automotive manufacturers. The remaining 50 percent is comprised primarily of tooling for consumer products — such as barbecue grills and light fixtures. One recent, unique project entailed tooling for Wi-Fi-enabled kiosks that will take the place of phone booths in New York City.

“We make very large tooling, and we’re fairly unique in the southwestern U.S. because of the size of the dies,” Newton says. Having been in the die-casting business for 30 years, Newton has seen manufacturing change drastically as CNC machinery and the software used to program it have evolved.

“We went from the point where it would take a day and a half to program the back of a cavity to taking an hour to perform the same job.”

To help Mangas produce its wide range of tooling, the company implemented the WORKNC computer-aided-manufacturing (CAM) solution, by Vero Software, in 2001. With tolerance demands of 10 microns or less for some of its large tooling jobs, machine and toolpath control are must-haves.

“We need the experience of our employees, but we need the technology as well,” Newton says. “The larger the block, the harder it is to keep the tolerance.”

“Thermal changes during the machining can make it challenging to maintain accuracy,” says David Venable, a CNC programmer with 35 years of manufacturing experience. “There’s a lot of components that goes into a mold, and they all have to work together seamlessly.”

While it’s vital that all components come together on the shop floor, Newton explains that teamwork among the Mangas crew is just as important. With help from WORKNC, Newton and his team have standardized operations to bolster consistency and capture best practices.

“We moved the majority of programming to a central office, which is where we really started working with the templates,” Newton says. “It’s really helped us with our quality because the operators see the same tooling every time. We’re doing the same thing over and over, but we have specific standards and better quality.”

Being able to save and reuse specific processes means that best practices and standards can be repeatedly applied without guesswork, which simplifies the process of programming in a shop with large workloads.

“Before we concentrated on standardization, we had a shop floor with all these different machines and different people doing different things — which made process control almost impossible”, says Mike Neal, a CNC programmer with 20 years of manufacturing experience.

“We had to set all the templates up, but once they were created, it was pretty much done,” says Newton, who adds that the initial investment in time quickly paid off.

“We went from the point where it would take a day and a half to program the back of a cavity to taking an hour to perform the same job,” Neal says. “Twenty years ago, it would take a weekend to generate toolpath, and now it’s a few minutes with less chance of error.”

Feature recognition, or the ability of the software to identify part features, can be used in conjunction with automatic hole machining in WORKNC. Pre-defined templates such as those created at Mangas can be used to program hundreds — or thousands — of holes in minutes.

Centralizing its tool library has further helped Mangas implement standardization. WORKNC tool-library functionality enables programmers to define and save the tools in their shops, as well as tools available from the catalogues of suppliers. A wide range of parameters can be associated with each tool in the library, and efficiency increases when those parameters are loaded into specified toolpath when the required tool is selected.

“We actually draw the toolholder and input that information into the tool library, or go to the tooling manufacturer’s website to input the toolholder into the software,” Neal says. “WORKNC is better than other software I’ve used at handling toolholders and tooling libraries.”

The Mangas team also takes advantage of WORKNC’s re-machining strategy, with ensures that material that remains after an initial operation will be automatically removed with increasingly smaller tools in a subsequent operation or operations. Additionally, because WORKNC offers dynamic 3D stock management, programmers are able to easily keep track of the state of the stock model throughout the programming process rather than just at the beginning and end.

To protect the shop’s ongoing investment in machinery, tooling, fixturing, and materials, the Mangas team uses the collision-detection capabilities within WORKNC, which takes into account the whole manufacturing environment to ensure that the generated toolpath is collision-free.

In addition to the functionality of the software, the team at Mangas is pleased with the level of support provided by WORKNC. Newton notes that the software’s development team keeps pace with the demands of the CNC market —  and has incorporated customer feedback to improve the solution, year after year.

“We see more and more demands from our customers in terms of quality, lead times, tolerances,” Newton says of how he’s seen the industry and associated technology change through the years. “We’re doing things now that we couldn’t do 20 years ago. With the competitiveness of the market, if you’re not moving forward you’re falling behind.”

“We went from the point where it would take a day and a half to program the back of a cavity to taking an hour to perform the same job.”